Sotheby’s is pleased to present highlights from the upcoming series of Asian Art auctions this September in New York, including auctions of Important Chinese Art, Indian, Himalayan and Southeast Asian Art, among much more. The series will also showcase exceptional works from renowned collections, including a group of magnificent and important ritual bronzes and sculptures from the famed collection of Barry MacLean, works on offer on behalf of the Albright-Knox Art Gallery of Buffalo, New York, and Important Chinese art from the Bruce Dayton and Ruth Stricker Dayton Collection. All works on offer are on public view in Sotheby’s New York galleries beginning 17 September, with auctions taking place from 17 – 29 September.

Ahead of Auctions Beginning 17 September

Leading Sotheby’s September Asia Week sales is an exceptionally rare gold-ground famille-rose five-piece altar set (wu gong) – marking the first time a full set of this type has ever appeared at auction (estimate $600/800,000). Vessel sets of any type are extremely rare in Chinese art, and gold-ground fencai works are among the rarest porcelains of the Qianlong period extant. The only complete wu gong set of gold-ground porcelain altar vessels is preserved in the Palace Museum, Beijing, and was included in the exhibition Lightness of Essence.

Tibetan Buddhist Relics of the Palace Museum, Macao Museum of Art, Macao, 2004. Made to surround the Emperor in the various palace and temple halls of the Forbidden City and other residences, this five-piece garniture is lavishly covered in gold. The present garniture is said to have been acquired in China about a century ago by Dr Denman Waldo Ross, who gifted it to J. Arthur MacLean, and subsequently remained in the MacLean family ever since. Ross was an American painter, professor of art at Harvard University, collector and patron, who was a highly influential figure in the art circles of the Boston area and as Trustee of the Museum of Fine Arts, Boston, had a major impact on the formation of the Museum’s collection as well as that of the Fogg Art Museum, Harvard. Sharing similar interests, Ross traveled extensively in China with MacLean – a Curator, Lecturer and Collector of Asian works of art, who was instrumental in the formation of Asian art collections in several American museums.

Additional sale highlights include an exceptionally impressive and extremely rare archaistic celadon jade 'twin fish' basin inscribed with a poem composed by the Qianlong Emperor and incised with the Emperor’s reign mark (estimate $200/300,000); and an elegant gilt-bronze figure depicting Buddha Dipankara seated on a lotus throne while making the gesture of 'Turning the Wheel of the Law' (dharmachakra mudra) (estimate $250/350,000). Buddha Dipankara, who is believed to have lived for 100,000 years, is one of the predecessors of the historical Buddha Gautama and is credited with setting the Dharma Wheel in motion, thus marking the beginning of the Buddhist faith. 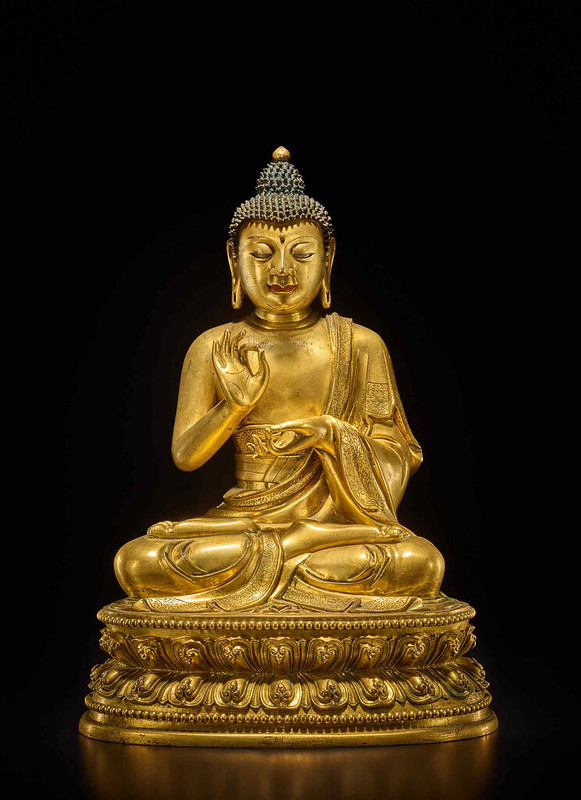 A Gilt-Bronze Figure of Dipankara Buddha

As part of the Important Chinese Art auction, a group of important ritual bronzes and sculptures from the MacLean Collection will highlight the auction. Collector Barry MacLean began building his collection in the 1970s with ancient pottery from around the world during business trips to Asia. He subsequently focused on material from East and Southeast Asia, and began collecting ancient bronze, stone sculpture and architectural fragments from these regions. An engineer and dedicated bronze collector, Barry manufactured using metals as a vocation for many decades, and thus, has always been amazed by the sophisticated processes and advanced skills in bronze making, casting and gilding found in ancient China. 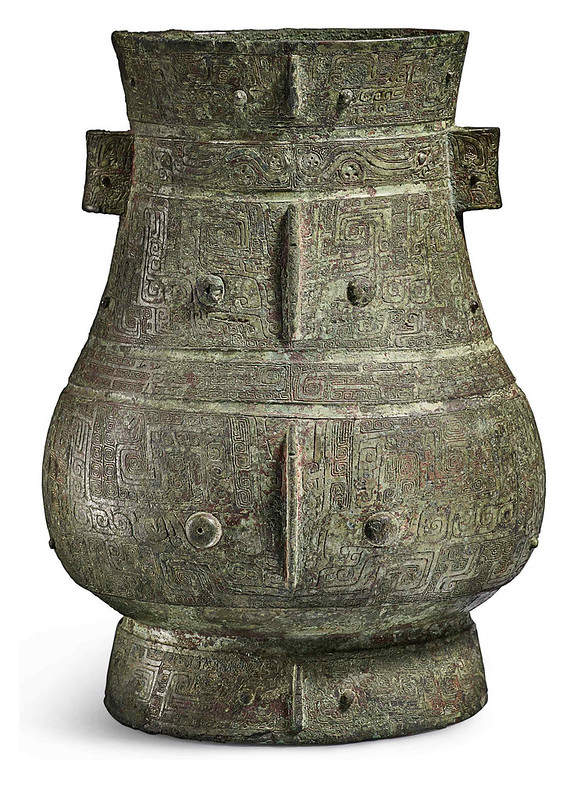 The remarkably comprehensive and varied collection of Chinese archaic bronzes showcases the ingenuity and inventiveness of China’s bronze casters. The selection is led by a Magnificent and Rare Archaic Bronze Ritual Wine Vessel (Hu) from the late Shang dynasty formerly in the important German pre-War collection of the industrialist Hans Georg Oeder of Priemern, Altmark (now Saxony-Anhalt) (estimate $400/600,000). The taotie bands on the present work are alternating with stylized animal borders, of which the uppermost one shows the undulating bodies of elongated creatures curving around unusual dotted roundels. This rare detail is similarly found on bronzes from the tomb of Fu Hao at Anyang, consort of King Wu Ding, the only undisturbed Shang royal tomb so far discovered, which can be dated to around 1200 BC. 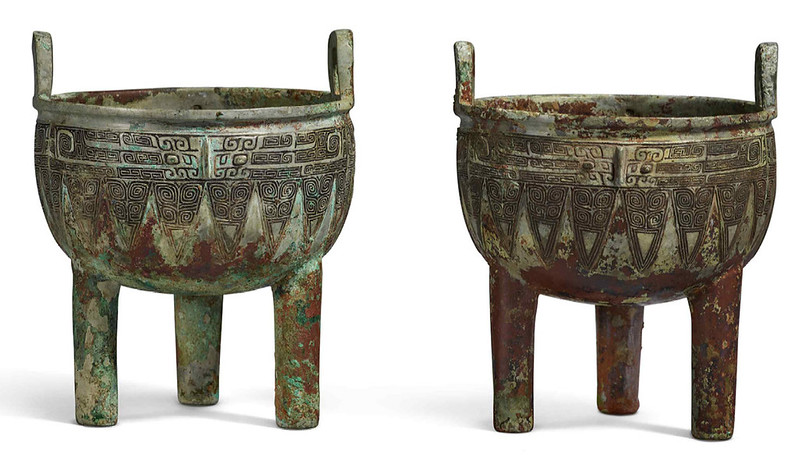 Further highlighting the collection is an Extremely Rare Pair of Archaic Bronze Ritual Food Vessels (ding) with inscriptions in mirror image (estimate $200/300,000). Pairs of archaic bronze vessels are very rarely preserved together and the present pair is particularly remarkable since the inscriptions seem to be deliberately rendered partly in mirror image, thus making these two vessels a true complementary pair.

WORKS FROM THE COLLECTION OF BRUCE DAYTON AND RUTH STRICKER DAYTON

Sotheby’s is privileged to present a selection of works from the Collection of Bruce Dayton and Ruth Stricker Dayton. Longtime philanthropists and supporters of the Minneapolis Institute of Art (Mia), the Daytons’ immense generosity, impeccable eye, eclectic interests, and continual curiosity shaped the institution into one of the leading encyclopedic art collections in America. 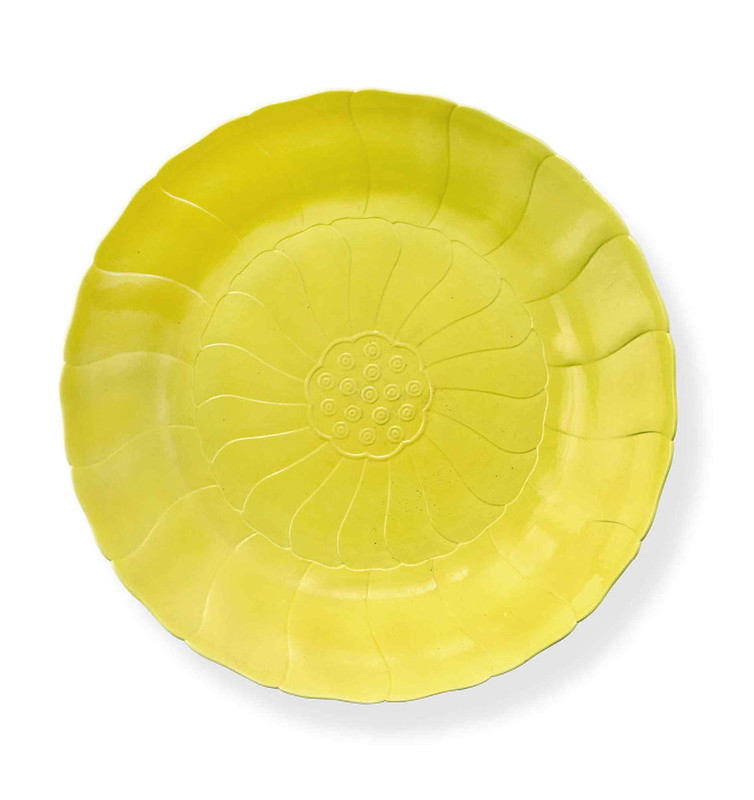 Reflecting their collecting taste as literati scholars, the selections in this sale include scholar’s objects, Chinese paintings, ceramics, bronzes, furniture, including a rare molded lemon-yellow-enameled ‘lotus’ dish, which belongs to a small group of dishes with the same enameling and form produced at the Yongzheng Imperial kilns (estimate $80/120,000), and an imperially inscribed blue and white 'Mount Hui Temple' teapot and cover (estimate $80/120,000). The Qianlong Emperor was a connoisseur of fine tea and is said to have composed over two hundred poems on tea preparation and enjoyment. The present teapot attests to the Emperor's fondness for the beverage not only through its function, but also in the image on one side of a gentleman being served tea in a pavilion, and in the Emperor's own poem on the opposite side. 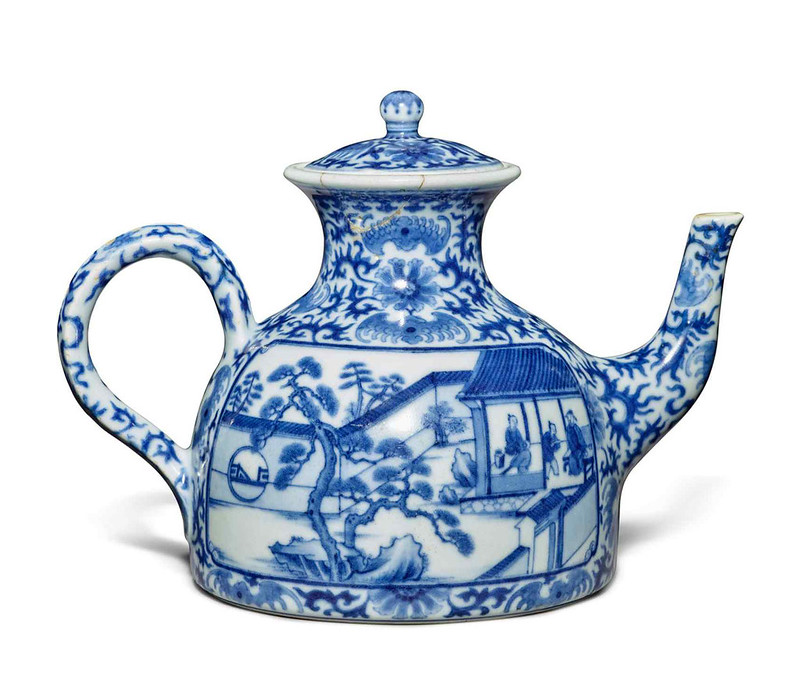 A selection of magnificent examples of Himalayan sculpture in this auction is led by an important central Tibetan Copper Alloy Figure of Manjushri – the bodhisattva of transcendent wisdom – dating to the 12th/13th Century, on offer on behalf of the Albright-Knox Art Gallery of Buffalo, New York (estimate $400/600,000). A rare and early example of Tibetan copper alloy sculpture interpreting Nepalese artistic traditions, the present image of the great bodhisattva Manjushri embodies the Buddhist aesthetics of youth and princely bearing. The choice of metal, style of casting and resulting appearance of the statue reflects the eclectic mix of artistic influence adopted by Tibetans in this period, including the traditions of medieval eastern India and Kashmir where bronzes are rarely gilded. 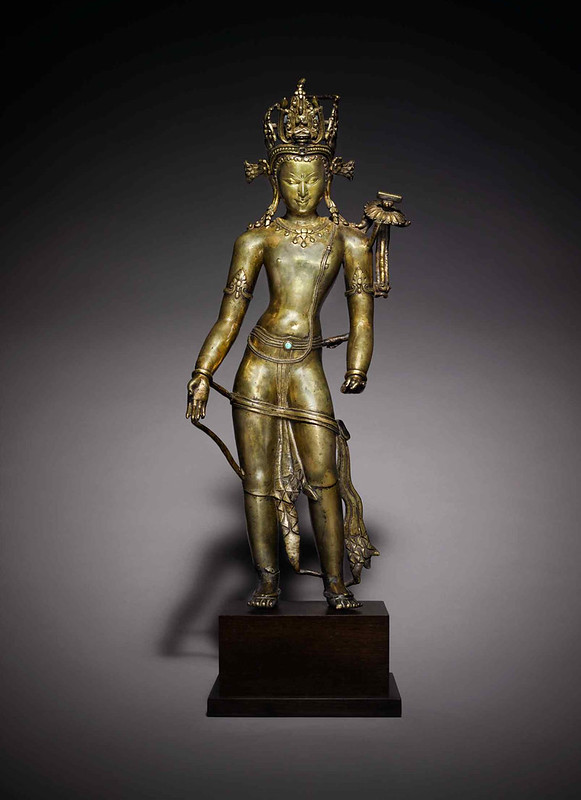 Works on offer from the MacLean Collection are highlighted by a Majestic Gray Schist Figure of a Boddhisattva – a superlative example of the Gandharan style of art that flourished in the northwestern part of the Indian subcontinent from roughly the 1st through the 5th centuries of the Common Era (estimate $250/350,000). This elegantly crafted sculpture displays the classic fusion of Indic and Hellenistic artistic traditions that characterized Gandharan art and is noteworthy for its inclusion of motifs drawn from Sassanian Royal imagery.

Sotheby’s is honored to present a single-owner online auction of a curated selection of works from the Junkunc collection, including jade carvings, early ceramics, porcelains, bronzes and scholar’s objects. One of the most important and well-known collectors of the 20th century, Stephen Junkunc, III, amassed one of the most extensive collections of Chinese porcelain, jade, bronzes, paintings and Buddhist sculptures of exceptional quality in America. The sale marks the continued success of the Junkunc Collection, which has achieved over $28 million across 2018, 2019 and 2020 Asia Week sales.

IN THE STUDIO: ASIAN ART FEATURING WORKS FROM THE COLLECTION OF BRUCE DAYTON AND RUTH STRICKER DAYTON

Hundred Antiques: Fine and Decorative Asian Art comprises of a selection of over 200 Chinese ceramics, porcelains, bronzes, jades, furniture, sculpture and other works of art. 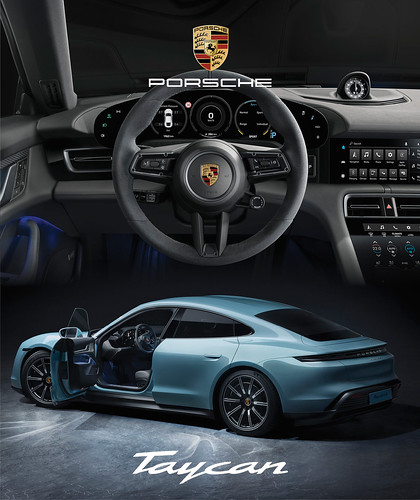