The fascination for Japan as a travel destination speaks to many. Before the world is ready again for tourism, Bonhams has gathered a collection of Japanese prints capturing the most scenic, albeit unfrequented and secluded, sides of Japan in the 20th century. This collection of Shin Hanga (New Print) by Kawase Hasui (1883-1957) spans more than 30 lots, and will be presented in Bonhams London sale of Tradition Travel and Transition: Japanese Art across the Centuries on 4 November 2021. 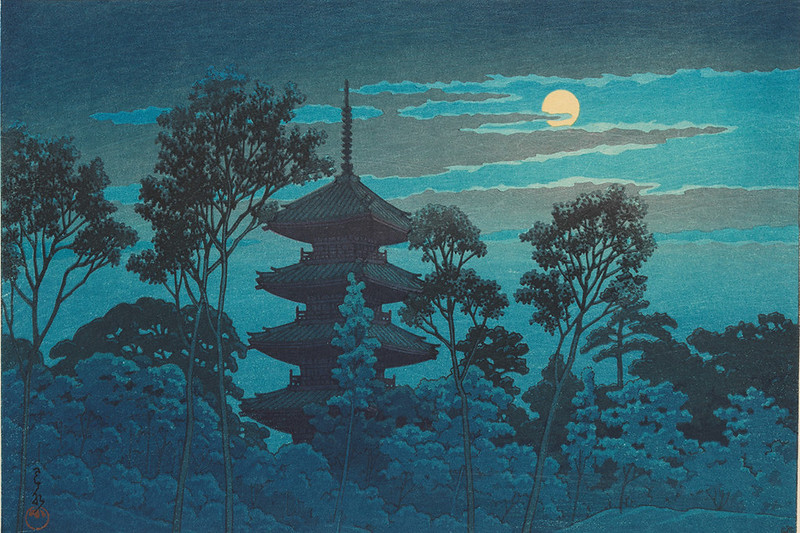 Kawase Hasui, a towering figure in Japan’s Shin Hanga tradition, is well known for his love of travel, a pastime which meant much more than mere tourism for him. As Hasui himself once wrote: ‘… travelling is my favourite hobby… and this hobby is not just something that I casually speak of, since sketching is my goal…’ 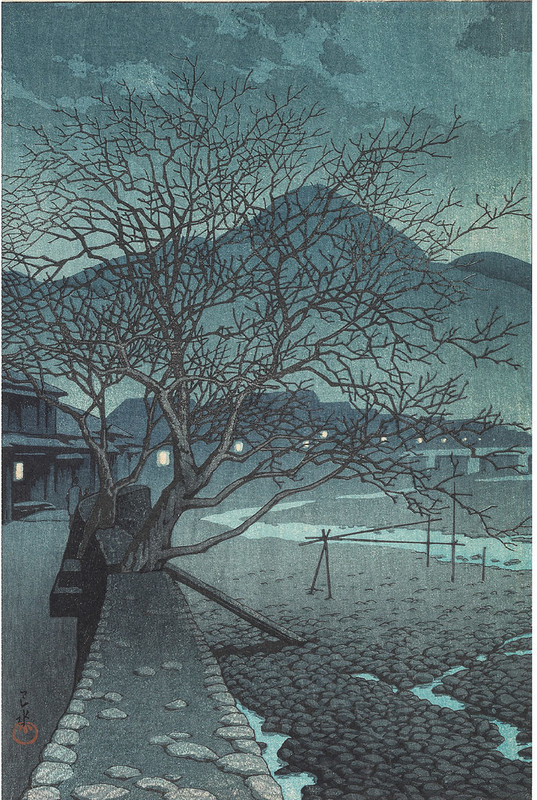 He was particular about where he would open his sketchbook, depicting famous spots but rarely choosing the most obvious or famous angles. Lot 350 (Evening in Beppu), for example, depicts the onsen (hot spring) resort of Beppu, as popular in 1929 as it is today, but seen through a tangle of bare, wintry branches.

Hasui treated his country’s great temples and shrines in the same independent spirit, avoiding the standard frontal view and focusing on a small section—often one without any distinguishing features—so that, as with lot 353 (Pagoda at Honmonji Temple; imaged at the front), only the written title reveals the building’s identity. 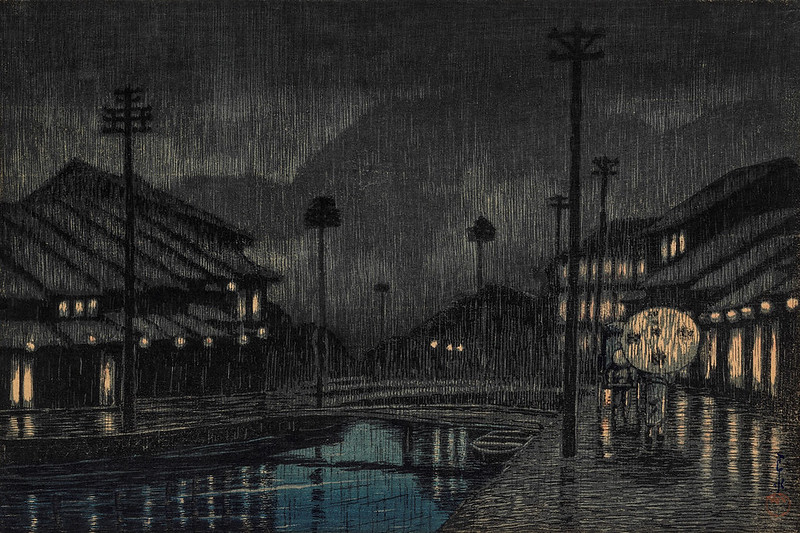 In terms of pure landscape, Hasui avoided picturesque views that had become famous, preferring to savour the quieter nuances of places, not mirroring them with banal precision but capturing their changing, elusive moods, as with lot 336 (Kinosaki) where he immerses the viewer in the melancholy atmosphere of a dark stormy night and the chill of a sudden downpour. 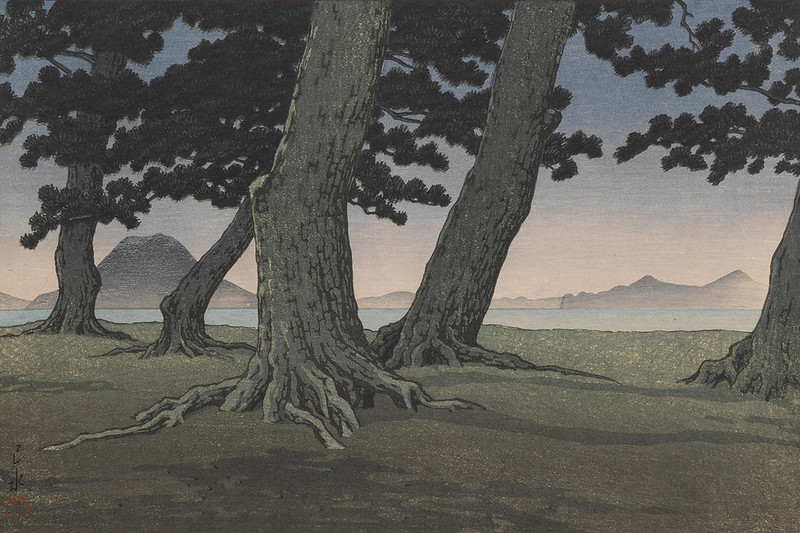 He travelled to feel, not just to see, and in so doing conjured an emotional response and encouraged a desire to travel freely—to experience the loneliness of a deserted mountain path (lot 344, Dusk at Aso) or a coastline characterised by the strange roots of pine trees whose dappled reflections are enhanced by a clear moon (lot 352, Teranohama). 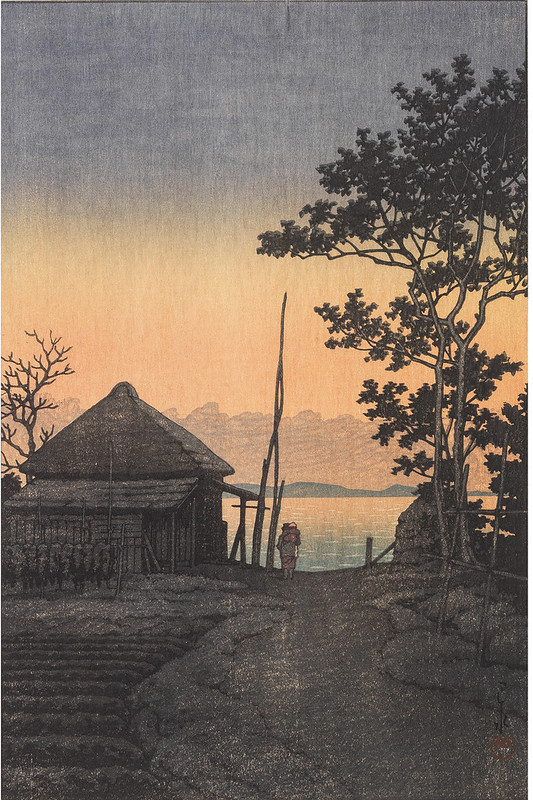 Hasui was a huge talent and enjoyed commercial success in Japan and overseas, designing more than 600 woodblock prints in only four decades, some published in editions of no more than 2,000, far fewer than some of the great landscape prints of the nineteenth century such as Hokusai’s ‘Great Wave’.

The majority of his prints in this sale come from private collections. Some bear one of the earliest copyright seals of his long-term publisher, Watanabe Shozaburo, while a few are designs even earlier and rarer, dating from before the great earthquake that devastated Tokyo and Yokohama in 1923. Most major museum collections of Hasui’s prints are in the United States, where his work first gained an international following in the 1920s—it is rumoured that the late Steve Jobs was also an avid collector.

Shin Hanga are 20th century Japanese prints made by the same traditional system used to create ukiyo-e, but are distinctly different in their look (western style); and tactile quality (because of the modern paper and pigments). Common themes of Shin Hanga includes landscapes, nature and actors. 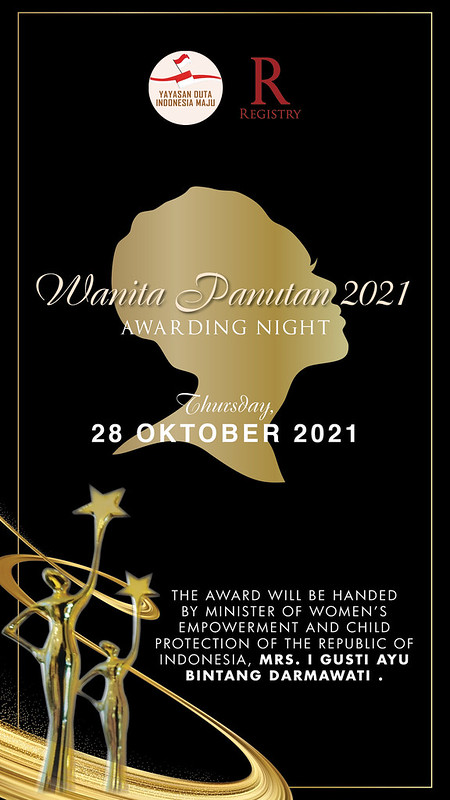